It was a dark and stormy night….

Actually, it was, but that is not where our story begins. We’ll come back to that later.

I was flying from Athens to Paris, by way of Bucharest, and something went sideways with my itinerary and I was shifted to a new flight, with a 12 hour layover in Bucharest. I was rather excited about this, as I had never been there. I immediately contacted my one Romanian acquaintance, Andrei, who happened to have a retired Navy officer friend in Bucharest who was more than happy to show me around the city.

Sitting in the Athens airport at my departure gate, I glanced around at my fellow travellers. On the other side of the lounge were three stunningly beautiful young Romanian women, tall, slender, heavily made up, astonishing fingernails. In America, they would have been models. Across from me was a small herd of be-suited men. Businessmen? Mafia? Vatican administrators? No clue. They were quiet, all carried a briefcase, expressed no impatience at the delay. I was the sole American, as well as the sole native English speaker.

We boarded our tiny plane, which was surprisingly cozy inside. The carpet was richly hued thick pile, the seats were small but comfortable, and an airline employee came round with magazines. All of them were in Romanian, and I ended up with some kind of sailing and island life one, which was interesting, as I hadn’t considered that being a big deal in Romania. Food arrived not long after we departed Athens. It was hot, and pungent with spices, and I have no idea what it was, but it was delicious.

As we landed in Bucharest, the sun was setting, and what I saw of the city from the air was beautiful. Imagine a Bladerunner-meets-Paris kind of thing, but better, and you almost have it. Andrei’s friend George met me outside the terminal, and off we went to see the city. 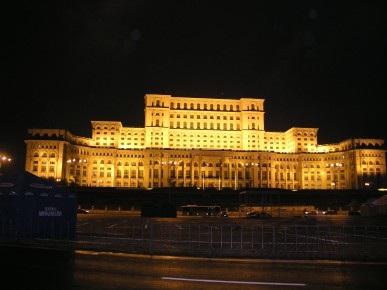 We drove all through the city, as George pointed out landmarks big and small.  The biggest, obviously, was the Parliament Palace, or People’s House, proudly identified as the heaviest, and the second largest building in the world, after the Pentagon. It was impressive. Well done, communism. 20 total floors (8 of them below ground), and 330,000 square miles. Plus there are tons of secret tunnels below, designed for the expeditious escape needs of former communist leader Ceausescu. Apparently he didn’t actually use them during the 1989 revolution, but the Top Gear guys got to try them out in more recent years!

Speaking of the former communist leader, we stopped by Ceausescu’s house, but did not ring the bell, as George suggested it was a bad idea. I wasn’t too disappointed, however, because shortly thereafter he parked the car, and suggested we step out to admire  the 19th century Romanian Atheneum. Stunning architecture, beautiful gardens, utterly lovely, even in October.

As we stood there, George suddenly grabbed my arm and pulled me to the street corner. “Wave politely,” he directed. We waved, politely. A convoy of large, shiny, black, expensive looking vehicles glided almost silently past us in the cold, drizzly evening. Two hands waved back importantly from within the third and fifth car. “What just happened?” I asked. George looked at me. “You just saw the presidents of Romania and Slovakia.” 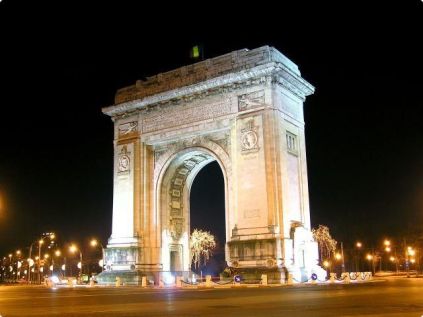 Expecting that to have been the highlight of my Bucharest adventure, we stopped off a few more times to look at things such as Revolution Square, Stavropoleos Monastery, and then we wandered about Old Town a bit. We also passed by Bucharest’s own Arc de Triomphe, built in 1922 to honour the Romanian soldiers who fought in WWI.

Then George drove me to my hotel, which Andrei had arranged for me, and dropped me off in the lobby, with instructions on how to get my ride to the airport in the morning.

I know what you’re thinking: airport hotels in all the world’s cities are fairly predictable.

This is not what happened that night in Bucharest.

It was (by this time) a dark and stormy night…

You know the thing with vampires and Romania, that everyone chuckles about but nobody believes? Well, this place was where I would hang out if I was a vampire in Bucharest. Thick stone walls, velvet damask wallpaper in blood red, creaky, enormous wooden doors…it was a monstrous castle of a place. My room was medium sized, and had all the required elements. Despite that, it retained the Draculaic creepy decor and atmosphere of the rest of the hotel, except for two things: the bathroom was all shining chrome and glass and white tile, like something out of clinical German porn, and stuffed in the corner of the bedroom on a small tea cart was a television. In case you wondered this, CSI Miami in Romanian is pretty much the same ginger fellow waving his sunglasses around, pensively saying “Eric…”

Okay, this didn’t happen in Bucharest, but it was the same year, and it suits the theme.

At some point in the middle of the night I realised that perhaps I had made a miscalculation in judgment. I was a girl alone in a creepy hotel somewhere in Bucharest, and nobody knew I was there, and I had no cell phone or laptop. Surely I was going to be bitten in my sleep and wake up in the shape of a bat. I decided that I was okay with that possibility.

Sadly, I didn’t. The alarm woke me on time, I made my way to the lobby for my ride to the airport, had a truly delightful conversation with the passport control fellow who spoke just enough English to be dangerous and entertaining, (ask me about this later!), and boarded my flight to Paris.

Despite the seeming scarcity of undead, I would return to Bucharest in a heartbeat. (See what I did there?) It is an under-appreciated, graceful old European city, worth far more than one night to truly appreciate all it has to offer. 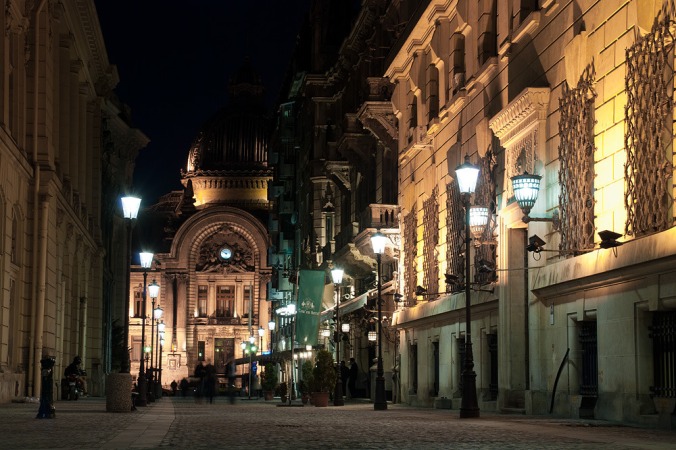